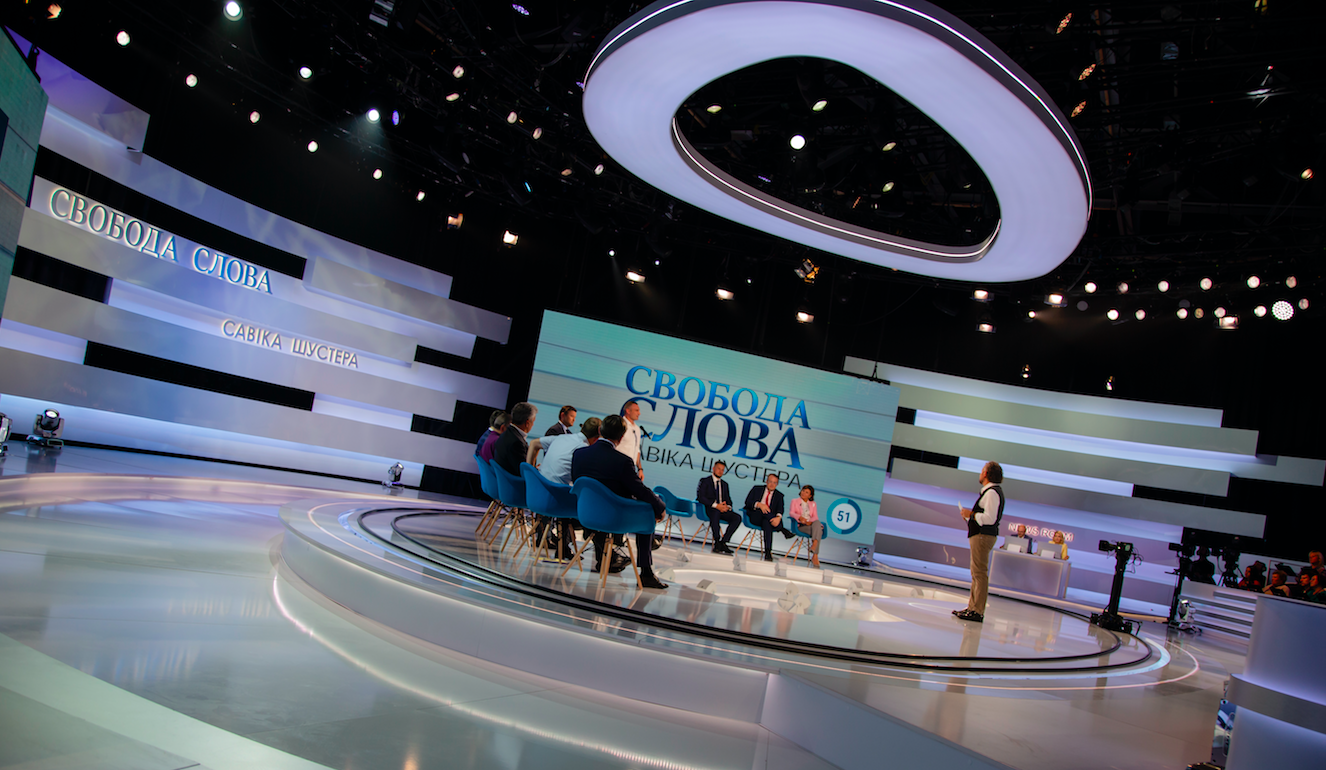 Magic Innovations company won the tender for creating a studio for Savik Shuster’s TV program “Freedom of Speech”. 5 different concepts were offered for selection. And after long discussions, one more was developed which became the final one and was implemented.

“The project’s aim was to create an innovative space for communication, idea expression, and discussion of acute issues that disturb the whole country. The production of decorations was based on the open dialogue concept. And therefore, the studio was made light, relaxing and energetic. Savik’s colleagues admit that the first impression of the completed studio was unusual. “We had a feeling we were aboard a spaceship,” advised Oksana Maliarenko, who was responsible in Magic Innovations for the current project realization.

The main task of the project was to implement innovation styling solutions and creation of the most comfortable environment for the studio guests. The platform for discussions is well seen both from a distant perspective and a closeup.

During the working process, we had to discuss every centimeter with sound and light specialists from France. Despite tight time scale and considerable project deviations from the original idea, the work was completed ahead of schedule. The project took only 2.5 weeks instead of planned 4.5 weeks.

The TV studio is located in a separate pavilion. It was a hard job to create the scenery as they occupy the territory of 925 square meters.

The key color is white. It represents an open and transparent approach. Each speaker is easily perceived due to a harmonious combination of space geometry, unique interior design, and a balanced mixture of matt and shiny coverage. Different light intensity is provided for separate scenery elements.

The absence of sharp corners became a zest of the idea. Every curvilinear element is rounded, including LED screens at the sides of the podium. Semicircular stands are installed in the central part of the scene. This approach allowed to rationally use the studio area without affecting free space.

Thanks to the suspended structures, the designers achieved the effect of pulsing space. The main podium for the talk-show participants is made in a drop-shaped form. It is equipped with the rails which are used for the moving robot camera looking for the most convenient angle for a closeup shooting of the speakers.

Psychological factors were a starting point in the scenery creation. The host of the TV show (Savik Shuster) is on one level with the audience. And taking just a step, he appears on the same plane with the speakers. These solutions allowed creating a high-quality and easily receptive picture.

International studio of multimedia solutions Magic Innovations again declared itself as a leading Ukrainian producer of performances of different themes and complexity levels. A high reputation of the company is proved by the successful implementation of projects UAE, where the audience is very demanding to quality and design.

The founder of the company Ostap Khitruk said his studio is used to new challenges and unusual customer requests. According to him, project realization in strict accordance with the customer requirements is provided by the flexibility and creativity of the team. “Once using our services, you will surely come back,” says Ostap with a smile.

Meanwhile, Savik Shuster’s “Freedom of Speech” raises its ratings attracting the attention of the viewers by an innovative and modern studio as well.