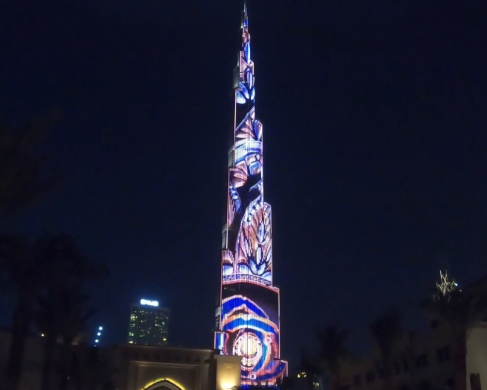 EID Mubarak is the most important holiday for UAE residents. On this day, the tallest skyscraper in the world Burj Khalifa lit up with the lights of a new projection show. Tourists who could not make it to the premiere could watch the evening animation daily during June and August.

The 3D projection was created by Magic Innovations, the Ukrainian studio of multimedia solutions. Its founder Ostap Khitruk advised the company has been managing the creation of 3D animated projects in Dubai for a long time. But only now they managed to realize the dream and see their creation on the world’s tallest structure (828 meters).

The history of animated show creation.

In 2017 the studio failed to win the tender with the proposed concepts, but the second time the company caught a lucky break. Tourists from all over the world could see contemporary art creation. The team of designers had been working on it for 1.5 months. To achieve a holistic picture, the designers had to take into account the layout of each pixel on LED screens located on the skyscraper and even their junctions.

To implement a spectacular 3D mapping show, the authors had to create a high-resolution video. The installation process took several days and required all the capacities of a render farm. Luckily, the company owns one.

“The project aim is to declare ourselves as a major player among the world 3D mapping studios. In the process, we were forced to rework separate parts of video content and remove small details. Due to height, they were hardly seen. And it worked. Within a few days since the first display, the number of subscribers to our accounts on Facebook and YouTube has drastically increased. The users posted a huge amount of video and made thousands of reposts.’’

According to Ostap Khitruk, if you combine the highest knowledge of graphics and skills of architectural design, you will create a new architectural composition. “It is our dream to create a unique show on such great structures as the Statue of Liberty (USA), the Leaning Tower of Pisa (Pisa), the Coliseum (Rome), the Pyramids (Egypt).”  Said the head of Magic Innovations.

Earlier, the studio demonstrated its mastery to the world at Festival of Lights in Berlin. Then it took the 1st place. This year, it took the first two places at APEX Awards in Las Vegas and the grand prize of the nomination The best content of the year. It managed to get into the Ukrainian Guinness book of records for the most grandiose projection on the Motherland Monument during the Eurovision contest.

The show in UAE was astonishing and impressed millions of viewers who visit Dubai in summer. The next goal of Magic Innovations is not going to be less ambitious. The company aims at conquering new heights of the architectural projection.